What every TV show can learn from Sleepy Hollow – The Week.
Thank you Laura (the author of this article) for pointing out all the reasons why I love Sleepy Hollow and for not ignoring all the things all those other articles have been ignoring about the show. It’s diversity in race AND in female characters are both the biggest reasons why it’s doing so well, it’s social media and the storyline are important, but if the leads were both white men, it wouldn’t be doing as well as it is.
Some points from the article that I loved:

First and foremost, the series boasts one of the most diverse casts anywhere on television. Two of its four series regulars are African-American (Nichole Beharie and Orlando Jones), while all three of its most frequently recurring characters — played by John Cho, Lyndie Greenwood, and Nicholas Gonzalez — are people of color.

Even Grey’s Anatomy, probably the other highly diverse show on television (I can’t even think of others besides the one I will point out next), doesn’t have the percentages of PoCs/whites as this show does. PoC’s have the higher percentage on this show, Grey’s (this is definitely not an official count, just a gut opinion) probably runs 50/50? I think the other show that can boast great diversity on Sleepy Hollow’s level is Brooklyn 99, which has 2 white guys and 1 white woman in it’s main cast of 7; the rest are PoCs.

The same study observed that shows with the highest percentage of racial diversity in their casts also performed better in the ratings than shows with less inclusive casts. As the study’s author, Darnell Hunt, pointed out: “It’s clear that people are watching shows that reflect and relate to their own experiences.”

Why does no one in Hollywood want to admit this is a true thing or do anything about it? Hopefully networks will follow FOX’s example (something I am loathe to normally say– I don’t agree with some of their other storytelling traditions)

It’s as if women can maintain relationships without being defined by who they’re dating — a novel concept!

Love this line. While most of the conversations between these women actually do revolve around Ichabod (which is of course going to be the case–not a fault but a necessity), it would totally pass the Bechdel test (if perhaps, the Headless Horseman were a woman). Their conversations aren’t necessarily about their relationships with the men, but about how to save them (or destroy them).

Jones has embraced fan fiction, fan art, gifs, and the art of “shipping” — for bothSleepy Hollow and similarly fan-friendly shows like Supernatural — endearing himself to the show’s growing audience and helping to bring fan activities that were once considered niche or somehow shameful into the mainstream, reducing the stigma that’s still generally attached to demonstrating your appreciation for a piece of pop culture.

I’ve definitely appreciated OJs commitment to the fandom. I’ve been a part of various fandoms in my life, but always in secret (well–some parts in secret. I am an obvious nerd about a lot of things, but I have read fanfiction, for example, but don’t really talk about it because of what the author says: the stigma of fan activities. I definitely downplay some of my fan ways, which may lead people who know me to go “it could get worse?!” ;-)). So, while I haven’t delved that deeply into the Sleepy Hollow fandom, I appreciate that others are allowed to voice their opinions, share their work, and interact with the stars of the show, because pop culture and fandom make people feel less alone in the world. It really brings people together, so it’s nice that the sources of these feelings encourage it.
This article has some other gems, including:

Despite it being their number one new show, the network wisely decided that a less-is-more approach was more prudent, commissioning a second season without insisting on a back-nine episode order — a risk that might have led to a reduction in quality as the writers attempted to stretch a 13-episode story into 22 installments. Far too many network series wear out fans with too many meandering episodes, but Fox has ensured that Sleepy Hollow will leave viewers wanting more instead of overstaying its welcome.

I agree with this sentiment, it is better to let them control 13 episodes of story than to force them to then expand it into 22, which definitely messes many shows up; many writer’s rooms aren’t adept at handling that transition. This will be better for Sleepy Hollow and the fans in the long-run.
I am glad there is finally an article that speaks of all the points that make Sleepy Hollow the show to watch this season.

How do you interrogate a Headless being?
Throughout this episode, I couldn’t help but think of the Mouth of Sauron scene from Lord of the Rings: The Return of the King. Of course, John Cho isn’t as creepy as the Mouth was, but he did a great job of disturbing me through his performance when channeling the Horseman. But let’s go back a bit.
The gang (they need an awesome name, like the Scooby Gang or the Ghostbusters or something) …
Read more at http://underscoopfire.com/sleepy-hollow-necromancer/ Thanks!

“For a moment it felt as if I were home.” “You are home, Crane.”
“I look forward to you expanding my horizons further.” I bet you do, Ichabod. 😉
“He who is without sin–fairly certain that isn’t you.”
“You want to get biblical?”
“Against the impossibility we would ever find each other, we did. And I am most ever grateful.”
“There are too many people I didn’t get a chance to say goodbye to. You are not going to be one of them.”

Welcome back to Sleepy Hollow, Sleepy Heads! We’re just about halfway through the first season of Sleepy Hollow (it’s got a 13 episode season 1 and has already been confirmed for season 2) and I think the last couple of episodes were exposition heavy and introductory, but from the promo for next week, we’re in for a lot of action and excitement for the latter half of the season. I am so glad this show is back!
The baseball opener is a not-so-subtle reference to the fact that the World Series pre-empted the show for the last few weeks, but gives Abbie some character depth; it gives her some fun cop toughness that is rare in a tiny black female like her. I love the detail of her loving baseball, because it’s not necessarily something black women are known for liking.
It was nice to see Jenny back, but she didn’t have much to do this episode. She got a sassy line, but didn’t even get an action scene. But her eyebrows, as usual, were on point.
Many people are excited about John Noble, who was on Fringe, but I’ve never watched Fringe. I know him as Denethor, the Steward of Gondor from Lord of the Rings: Return of the King. And he’s back in my life being a disgusting eater! I think I will enjoy his character and can’t wait for more of him. If all his scenes were just bible verse-offs with the other characters, I would be happy.
Even in a short season, they’re adding characters midway and 3/4 way through, giving us new faces to work with and new characters to uncover. I think the shortened season is really helping its storytelling, but boy will I miss it during spring when it’s 13 episode run is over for the season. Next week’s episode looks really exciting and I can’t wait.
By the way guys, look for my Sleepy Hollow (and soon, Scandal) recap posts on UnderScoopFire.com! Features more recap, less thoughts, but my process may change going forward. Right now, they’re different posts, mostly because I have the time and energy to make them so. But if I’m really tired, they may be the same. I’ll figure it out as I go along. I’m really excited to be spreading my blogger wings! Check it out here: http://underscoopfire.com/recap-sleepy-hollow-the-sin-eater/

(While you’re here, check out my other Sleepy Hollow posts from last season)
Can Jasmine Guy please play the Mills’ * auntie on Sleepy Hollow? There’s a fierceness in the eyes and eyebrows that are similar between Jasmine and Lyndie! As far as I know, the two aren’t at all related.
The popularity of this post skyrockets whenever Jenny is on screen! There are usually a bunch of google searches for the two actresses’ names together. Glad I’m not the only one who shares this idea!
*Aunjanue Ellis has been cast as Mama Mills, but there’s still auntie or ancestor or evil cousin…
**Aunjanue Ellis has the eyebrows for it. I approve. 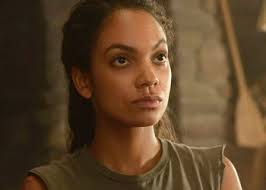 The similarity is definitely there!