What’s between snowflakes and flower petals? Maybe rain, baby tears? Whatever it is, Jane is in that in between state now. Neither Michael nor Rafael have come away with her affection, because she’s realized she should focus all of that affection on Mateo.

This week’s Jane the Virgin review is up over on Just About Write!

In addition to raving about the episode and the differences between Team Michael (Team Snowflakes) vs Team Rafael (Team Flower Petals), I discuss the small ways in which series creator Jennie Urman empowers women in all aspects of her show. From it being a woman-led series, to she herself being the showrunner, Urman also laces the Miami telenovela industry with powerful women. Here’s a screenshot of what I wrote:


It’s important for shows that proclaim powerful women or proclaim diversity also show it behind the scenes. Practice what you preach.

My latest Jane the Virgin review is up!

How is every single episode of Jane the Virgin a delight to watch, but also heartwrenchingly emotional? This week was no exception. As usual, it ran me through the gamut of emotions, from joy that Jane got into grad school, anger over everything related to Petra, relief that Rafael is telling the truth, confusion over being Team Rafael when Michael is also so wonderful, and the buckets of tears produced at Mateo’s baptism. Let’s swim through this sea of emotions together!

Jane the Virgin 2×03 Review Chapter Twenty-Five (Let Your Faith Be Greater than Your Fear) [Contributor: Connie] ~ Just About Write

I reviewed the Jane the Virgin premiere over at Just About Write! The show is back and just as good as when they left us. Chapter Twenty Three is merely the next chapter in the same awesomely hilarious and emotional book. I missed this show and am so glad it’s back in my life.
Read more: Jane the Virgin 2×01 “Chapter Twenty-Three” (She’s Armed, She’s Fearless) [Contributor: Connie] ~ Just About Write

I fell in love with an extraordinary number of new characters this TV season. Looking back in the ones I loved or connected with the most, I decided I’d make a list of my favorite new characters from this TV season. Once I made my list, I realized that they were all people of color. This was not on purpose, but it delights me greatly.

When Caitlin and Cisco guest starred in Arrow on season two, I didn’t care about them. I couldn’t really grasp who they were or connect with them at all. Once The Flash started, however, they quickly came into their own and Cisco proved to be one of the seasons funniest and savviest characters. I think what draws me to Cisco is the same thing that draws me to characters like Abed Nadir from Community or Kenneth the Page from 30 Rock. All of these characters are like me: pop culture savvy, people who make references to movies and TV on a daily if not hourly basis and are always looking for the hope and the humor in life. Cisco, by nature of his pop culture obsessed nature, is one of the meta characters on the show, the fact that he has recently been revealed to be a metahuman makes that even more meta. All things I love.

How do you not love him? 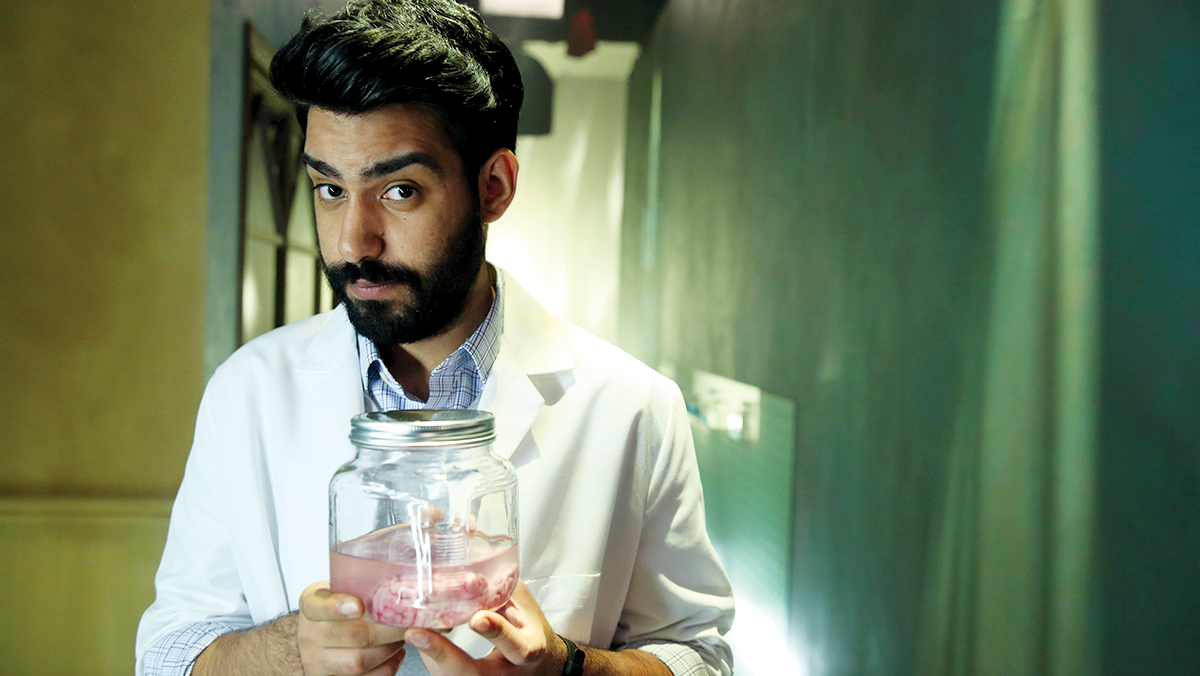 iZombie’s Ravi is the most recent addition to this list, but definitely a character I want to protect at all costs. (Being that it’s a zombie show, all characters run the risk of dying, but don’t do it to Ravi!) I think what first struck me about Ravi was his loyalty. He meets Olivia Moore, this weird girl who used to be an ER doctor, and when he discovers her secret, he doesn’t tell anyone, not even her. He vows to keep her secret and help find a cure for zombieism with no personal gain. His immediate loyalty to both her and Major is extremely endearing. He’s also snarky, has fantastic hair, a great accent, and looks great in a suit. I hope season two provides for Ravi backstory and opportunities for Liv and Major (and Peyton?) to return the loyalty favor.

We’re glad you are, Ravi.

It’s hard to introduce a new character when your show is 11 seasons in, but Grey’s Anatomy manages to consistently add new characters and have fans come to love them. One of the first things I loved about Maggie was her hair. As a natural black girl myself, seeing curls like hers on TV is always a delight. I was hesitant about her character, as she was introduced so soon around Cristina Yang’s exit—I feared they would try to replace Cristina in Meredith’s life, especially once you find out she is her sister. And while Maggie is slowly plugging the hole that Cristina (and now Derek) left in Meredith’s life, she isn’t trying to replace her. She is her own character who interacts with Meredith in a different way, a way that Meredith needs now that she’s lost those who were previously so close to her. Maggie brings loyalty (have I mentioned I love loyalty in fictional characters? Because I do.), a willingness to be there no matter what the question (her offer to babysit Mer’s kids), and a somewhat normal family background. She’s also awkward, nerdy (she’s an expert crossword puzzle solver—a cruciverbalist), and she’s interested in helping other people. These are all wonderful qualities and I can’t wait to get to know Maggie more.

You’re too good for this hospital, Maggie. Save yourself!

Ask anyone who’s seen Jane the Virgin and they will extol the wondrous and many virtues of Gina Rodriguez. You’ve probably seen the think pieces, her Golden Globes speech, and her (amazing) Emmy campaign poster by now, so you know that she and her character Jane are well loved across the TV fandom. Nearly everything about Jane makes me love her (even her faults, because they are things I relate to), but the things that I might love most include the fact that she’s a writer (who is still trying to figure out her writing path), she’s loving to her mother and grandmother, she’s funny, she shops at Target, and she fearless even in her insecurites. Even if Jane is unsure, she determines to find out the answer, to become sure. She does her research, but she also listens to her heart. She allows herself to cry and still know that she is strong. She’s a great model for young female characters. I am so glad we have Jane.

I hope we get more rapping Jane in Season 2.

Kids on TV are hard to cast. Sometimes they can be seen as annoying or too sweet or unrealistic. blackish’s Diane Johnson defies these challenges. She’s cute but she’s smart, she’s fierce but she’s relatable. She’s funny but not in an annoying way. I love that Diane speaks her mind. That she’s smart and knows it and doesn’t back down or apologize for it. I love that she realistically puts down her twin brother, but won’t let anyone else mess with him. I love that she scares Charlie. Also I love her dimples and her sass and her glasses and the way her hair is different in every episode and that once they even put her in a headscarf (because Lord knows she’d need to wear her headscarf in order to keep those barretts in place at night). Diane is shaping up to be a fantastic person and I am so excited to see her grow older.

I think Evan and Emery Huang come as a package deal for me. They’re both adorable and it would be easy for them to be written similarly (especially in their contrast to Eddie and especially due to their closeness in age), but the show gives them distinct personalities that still have an opportunity to shape and grow.
Emery gets all the girls and is clearly sweet to them and his family.

Evan uses his cuteness to get away with everything, including his sharp tongue, and he’s well aware that that’s what he’s doing.

Both boys are smart and funny, the actors have excellent comedic timing. I can’t wait to see who they become as characters because they’re so young that they can still change and grow depending on the writing.

Who were some of your favorite new characters this TV season?