On this week’s Castle, the team investigates the death of a viral meme star and Castle himself is a victim of the dark side of memes.

END_OF_DOCUMENT_TOKEN_TO_BE_REPLACED

I wrote this for TVOvermind about the stars of Castle!

Find out more here: Things You Didn’t Know About the Castle Cast.

In this week’s Castle, Castle and Beckett get their groove back in more ways than one. In what is a fluffy, flirty, and fun episode, a pool shark (but maybe not just that) gets murdered by an invisible assailant, while our dynamic duo try to ignite the fireworks between them.
Just as Castle and Beckett decide they’ve been ready to do the horizontal mambo since Rick’s two month disappearance, a phone call interrupts their run to the bedroom. The victim, William Fairwick, was stabbed in the chest with a pool stick. It seems to be a locked room mystery, with one slamming of the door and locked windows in a high-rise building. The victim seemed to work for Greenblatt Insurance, but made his real money hustling Wall Street-ers. But recently, he’d been scared that he’d “sold his soul to the devil” and his time was up. Castle hops right on to this theory, which is solidified by the mysterious surveillance tape Tory shows them. In it, the victim, once in his apartment, appears to be alone, with the door mysteriously shutting after the murder is over. “The devil came and got his due.” Kate remains the rational detective, ready to look at the facts, but Castle is overjoyed to think it might be the devil taking Will’s soul. “You live by the cue, you die by the cue.”
This episode was rife with great Castle/Beckett sexual tension, literally because every time they try to have sexy times, the phone rings and Kate’s professional nature won’t let her ignore it. There were so many great moments of banter and case foreplay, like what we used to see before they got together. The scenes are especially ripe with tension as it’s been over two months since they were together and also because they have opposite opinions on what happened to the victim. All very classic Caskett interactions, which was great after the tension between the two in the last few episodes. Both sides of the show are great and I’m glad we’re on the comedy side of the dramedy genre this week (but I can’t wait until we catch more clues into Castle’s disappearance).
Read more at Castle 7.03 Review: “Clear and Present Danger” on TVOvermind!

Check out the link to my Castle 7x02 review over on TVOvermind!

END_OF_DOCUMENT_TOKEN_TO_BE_REPLACED

When the news broke this summer that Andrew Marlowe was stepping down as Castle showrunner, I can’t say that I was actually all that nervous. David Amann was already a Castle writer and I just had a lot of faith in the writing staff to protect Marlowe’s project, especially since 1. He’d still be around (he’s writing 7.02!) and 2. His wife still writes for the show. And after that premiere, I feel safe in my faith in the show going forward. Six plus seasons is a long time to keep things fresh—a typical procedural relies to cycling through “ripped from the headlines” cases and replacing the cast when necessary, not Castle. They somehow brought us fresh dynamics to fuel us throughout the season while keeping the characters the same.

The beginning of the episode was stunning. Kate in her beautiful dress reaching towards the flames, then getting doused in water as she waited for the confirmation that Castle wasn’t in the car. (I’ll forgive them for letting Kate stay that close to a car that could explode at any moment.) After the moment of despaired silence, the action kicks into gear as Kate does what she does best, look for clues. I loved the Sergeant who was so eager to help out, especially after Kate’s “he’s one of our own.” Castle has been granted this treatment before, but it’s always so great to hear. Esposito and Ryan are dashing detectives as they start the investigation still in their tuxes, doing whatever they can for two of their favorite people. Our team finds the SUV that ran Castle off the road, just as it’s being flattened—Beckett takes that to heart as she tackles the junkyard employee flat to the ground.

Check out my recap/review of this week’s Castle, “That ’70s Show,” a hilarious episode filled with disco and death.

This week we suited up in our best polyester and danced the night away on Castle. A body is found in a construction site and it’s an infamous mobster surfacing after disappearing in 1978. Castle and Beckett must do the time warp back to that year to get the answers they need.

I got the chance to interview Castle star Seamus Dever before last night’s 70s themed episode. I also got to watch a screener ahead of time! TV blogging is pretty darn awesome. Check out my interview by clicking through below.

Castle’s Seamus Dever gives us the dish on the groovy 70s themed episode coming up this Monday. It’s a hilarious, laugh out loud fun-fest with great twists and turns. A body shows up at a construction site and it becomes clear that this was a mob hit finally coming to the light. But the lead witness is stuck in the 1970s. Castle, king of wacky theories and plans, devises they should go with it to get the information they need. Dever teases us with the 70s scoop:

via Castle 6.20 Interview with Seamus Dever.

Castle 6.11 Review: “Under Fire”.
Click through for last night’s review of Castle “Under Fire”!

A hot fiery episode of Castle to take the chill off of winter, complete with a heartwarming ending.
In this week’s Castle, Ryan and Esposito fall victim to the pyrophilic nature of a serial arsonist, who gets his kicks from watching a building succumb to the flames. But between Castle, Beckett, Captain Gates, and an arson investigator, our boys are saved just in time to meet the newest member of the 12th Precinct.
[…]
Ryan and Esposito get to be the ones in mortal danger—in fact, the scene where Ryan sees Espo give in to the carbon monoxide and he collapses against him was very reminiscent of the scene in “Countdown” where Castle and Beckett fall asleep leaning against each other as they freeze to death. 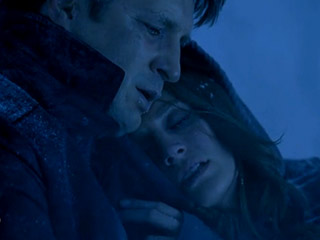 Also check out my episode press interview with Seamus and Juliana Dever!


Before Christmas, I got the chance to interview Castle’s Seamus and Juliana Dever for tonight’s upcoming episode. They were awesome and nice and a wonderfully cool married couple. It was a bunch of fun and I am so very glad for the opportunity to spread by blogger wings. Click the link above and check it out! And watch Castle!